Fudgy Fort is the 182nd episode in Candy Crush Saga and the second episode of World 37 (HTML5). This episode was released on 16 August 2017. The champion title for this episode is Chewy Champion.

Tiffi brings a striped candy and a pack of candies to Benny, who is a knight of Fudgy Fort. 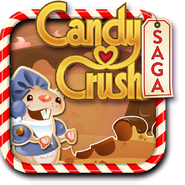