Fudgy Fountain is the 288th episode in Candy Crush Saga and the third episode of World 58 (HTML5). This episode was released on 16 January 2019. The champion title for this episode is Hiding Hero.

Tiffi and Benny watch with delight as the fountain sprays chocolate and sweets on the trees. 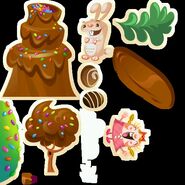