Fun-O-Meter was an element in the web version of Candy Crush Saga. It was released on September 4, 2013 upon the release of the 32nd episode, Sugary Shire. It popped up after every 4th playout of a level, regardless of success or failure. A prompt was given: "How fun was this level compared to other levels?"

Players could drag the pointer to the left (Boring!), right (Wohoo!), or anything in between. 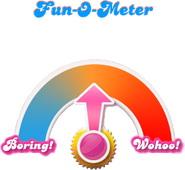