Fungi Fields is the 463rd episode in Candy Crush Saga and the third episode of World 93 (HTML5). This episode was released on 29 April 2020. The champion title for this episode is Great Gatherer.

Tiffi and Foxie hunt for mushrooms in the forest. 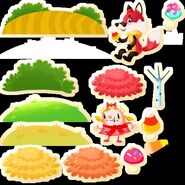