Gelato Glacier is the 279th episode of Candy Crush Saga and the fourth episode of World 56 (HTML5). This episode was released on 19 December 2018. The champion title for this episode is Super Scooper.

Allen and Tiffi arrive in the glacier via the blue spaceship previously seen in Cacao Cliff. They both enjoy eating the ice cream the glacier has to offer. 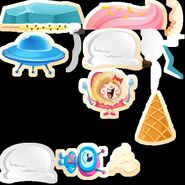 Retrieved from "https://candycrush.fandom.com/wiki/Gelato_Glacier?oldid=1597613"
Community content is available under CC-BY-SA unless otherwise noted.