Gelato Grotto was the 35th episode in Dreamworld and the fifth episode of World Six of Dreamworld. This episode was released on 18 December 2014. It was the Dreamworld equivalent to the Reality episode Ice Cream Caves.

Tiffi wears a doughnut vest and a cherry hat as Shiba Inu feels delighted after eating some ice cream.

Gelato Grotto is fairly easy. It starts out with three somewhat hard-hard levels: 501, 502, and 503, but it gets easier as the player progresses. Overall, this episode is much easier than the previous episode, Sprinkle Springs and has an identical difficulty to its Reality counterpart, Ice Cream Caves. 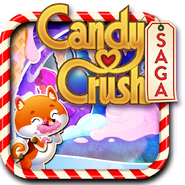 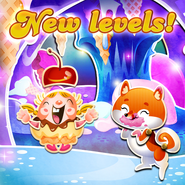 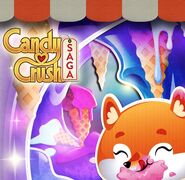 Retrieved from "https://candycrush.fandom.com/wiki/Gelato_Grotto?oldid=1588218"
Community content is available under CC-BY-SA unless otherwise noted.