Genie Jellybeanie is a minor recurring character in Candy Crush Saga. He is a genie who encountered in the 9th episode, Peppermint Palace, where the terrible troll has destroyed his palace. After completing level 125, Tiffi pulled the rope to fix the palace. He also appears in the older iOS and Android versions of the game, when a player is about to fail a level. He now appears on both versions just as one is about to fail when the player is about to run out of lives, to inform that there's "no more lives".

He also appears in the 69th episode, Tasty Treasury. After completing level 1025, he comes out from the treasure chest and gives a treasure map to Tiffi.

He makes a cameo appearance in Syrupy Circus. He is among the spectators in the circus show.

In the 121st episode, Fruity Fairground, Tiffi ate the apples to help him lighten his loads and continue performing as a strongman.

In the 241st episode, Delightful Desert, he and Tiffi find three strange-looking candies in the desert; one red, one yellow and one green.

In the 286th episode, Berry Bazaar, Tiffi uses a flute to charm his snake.

In the 9th Dreamworld episode, Bonbon Baths, he is shown to be enjoying a Turkish bath. 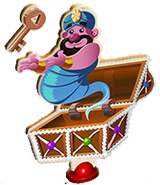 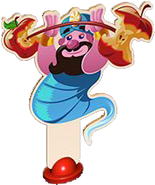 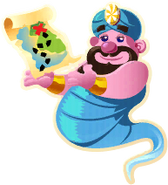 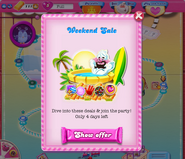 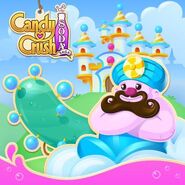