Gingerbread Gym is the 194th episode in Candy Crush Saga and the fourth episode of World 39 (HTML5). This episode was released on 1 November 2017. The champion title for this episode is Antique Athlete.

Barry wanted to look as cool as his favorite statue of an athlete. He has achieved great results in the gym but something is missing. Tiffi helps by covering him in white glazing and sprinkles to give him the perfect look. 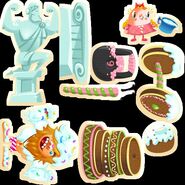 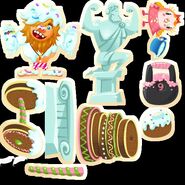