Glazed Grasslands is the 406th episode in Candy Crush Saga and the first episode of World 82 (HTML5). This episode was released on 18 December 2019. The champion title for this episode is Stripe Supporter.

Tiffi admires Suzy's stripes as she gets a donut from the tree. 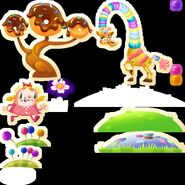