Glittery Gala is the 278th episode in Candy Crush Saga and the third episode of World 56 (HTML5). This episode was released on 12 December 2018. The champion title for this episode is Glamorous Guest.

Tiffi and Cherry Baroness party at the gala on New Year's Eve. 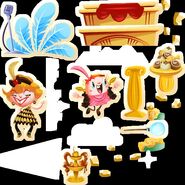