Gumball Grounds is the 240th episode in Candy Crush Saga and the fifth and final episode of World 48 (HTML5). This episode was released on 4 July 2018. The champion title for this episode is Gummy Gardener.

Tiffi and Benny find a house that is made from sweets and chocolate. Tiffi gives one of the gumballs from the house to Benny. 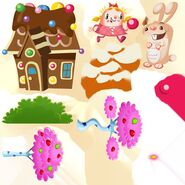