Gummy Galaxy is the 58th episode in Candy Crush Saga and the third episode of World 11 (HTML5). This episode was released on 18 February 2015. The champion title for this episode is Saucer Seeker.

Before episode:
Allen is annoyed because his spaceship is broken again.
After episode:
Tiffi takes out a remote control, and another alien, possibly Allen's girlfriend, or his wife, shows up in another spaceship. She beams Allen into her spaceship, and they ride off together, as Tiffi waves goodbye. 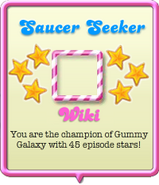 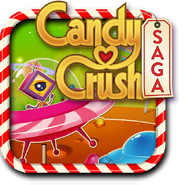