Gummy Gazebo is the 264th episode in Candy Crush Saga and the fourth episode of World 53 (HTML5). This episode was released on 24 October 2018. The champion title for this episode is Perfect Poser.

Bubblegum Troll finds a marshmallow flump in the gazebo for Tiffi to use as a trampoline. 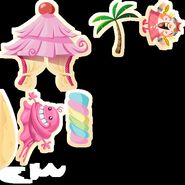