Harmonious Hives is the 420th episode in Candy Crush Saga and the fifth and final episode of World 84 (HTML5). This episode was released on 22 January 2020. The champion title for this episode is Cheerful Crafter.

Tiffi and Bobby extract honey from the beehive. 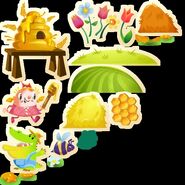