Hazelnut Harbour is the 371st episode in Candy Crush Saga and the first episode of World 75 (HTML5). This episode was released on 2 October 2019. The champion title for this episode is Crunchy Crusher.

Tiffi chops down the trees to gather hazelnuts for Hilda. 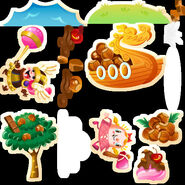