Hippo is a minor character in Candy Crush Saga. He first appears in the 70th episode, Luscious Lagoon. Before introducing level 1026, he holds a beverage given by Tiffi and swims with her on the water.

In the 130th episode, Hippy Hills, he slides on a lemonade slide that Tiffi clears out for him.

In the 168th episode, Savory Springs, he is riding on a huge geyser of soda.

In the 244th episode, Sugary Slide, he and Tiffi slide down the waterslide on donut-shaped floats.

This is the first character to be introduced after the end of Dreamworld. It is also the first static character. 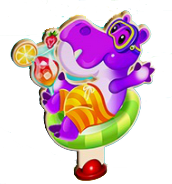