Honey Henge is the 315th episode in Candy Crush Saga and the fifth and final episode of World 63 (HTML5). This episode was released on 17 April 2019. The champion title for this episode is Stony Stacker.

Tiffi paints the rocks with honey to brighten up Hilda's day. 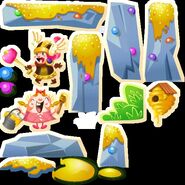