Honey Hives is the 263rd episode in Candy Crush Saga and the third episode of World 53 (HTML5). This episode was released on 24 October 2018. The champion title for this episode is Fluttery Flosser.

Tiffi scrubs all of the hives clean with a toothbrush so Boomer can have a nice home. 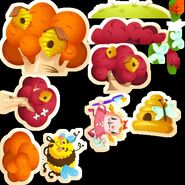