Ice Cream Caves (Episode 391) is the 391st episode of Candy Crush Saga and the first episode of World 79 (HTML5). This episode was released on 14 November 2019. The champion title for this episode is Canine Caver.

Shiba Inu got her head caught in an ice cream cone. Tiffi calms her down by bringing her ice cream. 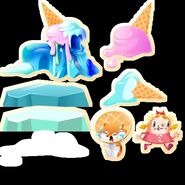 Retrieved from "https://candycrush.fandom.com/wiki/Ice_Cream_Caves_(Episode_391)?oldid=1597729"
Community content is available under CC-BY-SA unless otherwise noted.