Icecream Isle is the 225th episode in Candy Crush Saga and the fifth and final episode of World 45 (HTML5). This episode was released on 2 May 2018. The champion title for this episode is Chilly Chewer.

Tiffi and Minty go for ice cream. Tiffi gets a chocolate-caramel stick and Minty takes a bite out of a huge chocolate lolly with sprinkles. 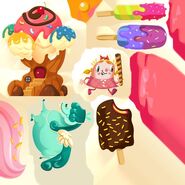