Ingredients are one of the main elements in Candy Crush Saga that need bringing down in ingredients levels and mixed levels that require ingredients. There are two different ingredients: cherries and hazelnuts. Cherries first appear in level 11 and hazelnuts in level 17.

They fall randomly in the early part of the game, and from level 217 (level 29 unofficially due to a redesign) onwards they can come out from a candy cannon. These objects fall and can be switched like regular candies, however, they cannot be matched with any other candy and they cannot even be matched with a colour bomb or any other special candy, nor will they be destroyed by any blockers or other elements (unless a glitch has occurred). If there is a shuffle, the ingredient will stay put.

Like all candies, ingredients can fall through a teleporter, but cannot make it past a blocker. When an ingredient reaches a layer with the green arrow on, it is collected and the player gets 10,000 points. However, you must make a valid move to collect an ingredient. You cannot swap it with a non-matching candy at the exit without a Free Switch.

Ingredients slide within candies in front of them

Ingredients slide without candies in front of them 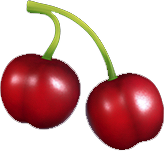