Jelly Wagon is the 38th episode in Candy Crush Saga and the third episode of World 8 (HTML5). This episode was released on 2 April 2014. The champion title for this episode is Whacky Warlock.

Before episode:
Magic Mort the magician has made all of his candies disappear. But when he tries to make them reappear, the only thing he ever gets are vegetables and fruits (cropsies from Farm Heroes Saga).
After episode:
Tiffi helps Franky *reappear* his candy sweets, satisfying the magician.

Jelly Wagon continues the trend of a low amount of candy order levels and a high amount of jelly levels.

It is a somewhat easy episode, with a mean of 3. Those levels pose a challenge: 546, 547 and 556. Overall, this episode is harder than the previous episode, Sticky Savannah.

I will make the candies appear!

I never should have make them disappear!

I made my candies disappear. When I try to make the reappear however....

All I get are vegetables and fruit!

Let me do the trick! 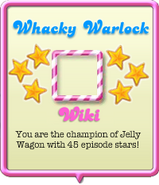 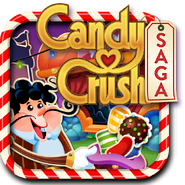 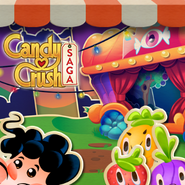 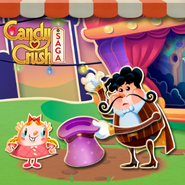 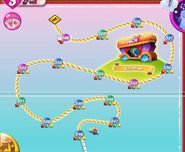