Some information in this page has been outdated.

King, formerly/also known as King.com, is a casual-social games company, and the second largest game developer on Facebook. King develops games for the web on king.com, for mobile (both iOS & Android) and Facebook.

King developed Candy Crush Saga, which surpassed Zynga's Farmville 2 as the most popular game on Facebook since March 2013 and it has the most iOS downloads.

King games offer synchronised play, enabling users to connect to their Facebook account whilst playing on their smartphone or tablet device. This means that the users progress is updated across all platforms, allowing the player to switch from mobile, to tablet, to Facebook without losing their progress in the game.

The popularity of Candy Crush Saga

King's most popular game to date is Candy Crush Saga, which was launched on Facebook in April 2012. Following its success on Facebook, King launched Candy Crush Saga on mobile (iOS and Android) in November 2012. The Game was downloaded over 10 million times one month after its release.  In January 2013, Candy Crush Saga became the No.1 game on Facebook and had over 45 million monthly users by March of the same year.

Bubble Witch Saga was King's first mobile game, released in July 2012 after its successful launch on Facebook in September 2011.

King has a catalogue of over 150 games available in over 14 languages. The company releases new games every month. In March 2013, King launched 2 new games on Facebook, Farm Heroes Saga and Papa Pear Saga.

King has offices or game studios in:

King is a private company with more than $47 million in venture investment from Apax Partners and Index Ventures.

King logo on King.com website
Add a photo to this gallery 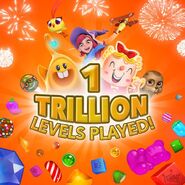 1 trillion levels played! (February 2015)
Add a photo to this gallery