Lava Lake is the 340th episode of Candy Crush Saga and the fifth episode of World 68 (HTML5). This episode was released on 17 July 2019. The champion title for this episode is Cocoa Connoisseur. 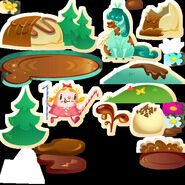 Banner glitch
Add a photo to this gallery

Retrieved from "https://candycrush.fandom.com/wiki/Lava_Lake?oldid=1459515"
Community content is available under CC-BY-SA unless otherwise noted.