Lemon Lighthouse is the 227th episode of Candy Crush Saga and the second episode of World 46 (HTML5).

The lemon lighthouse is about to topple down! Tiffi quickly places choco sticks to keep it standing. 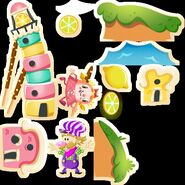 Retrieved from "https://candycrush.fandom.com/wiki/Lemon_Lighthouse?oldid=1248926"
Community content is available under CC-BY-SA unless otherwise noted.