This is the first episode that needs to be unlocked by getting three tickets from friends on web version. On mobile version, you will head straight to level 21 without the need for any tickets.

Before episode:
The player encounters Denize that is crying because the lake ran out of lemonade.
After episode:
Tiffi jumps onto the rocks to turn the knob on the pipe, filling the lake with lemonade. Denize becomes happy and says, "Hurray! Cheers for the lemonade!".

Being the first 15-level episode, Lemonade Lake is an easy episode, with a mean of 2.27, as it features many easy levels. However, it has one medium level: 35. There used to be many slightly hard early levels in this episode, but they have all been drastically nerfed. Overall, it is somewhat harder than the previous episode, Candy Factory, but still easy in overall difficulty.

The lake is out of lemonade! (before story) 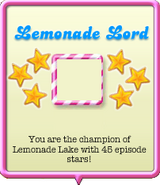 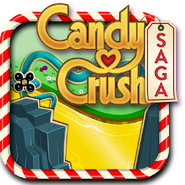 Retrieved from "https://candycrush.fandom.com/wiki/Lemonade_Lake?oldid=1609430"
Community content is available under CC-BY-SA unless otherwise noted.