Level 11 is the first level in Candy Factory and the 1st ingredients level. To pass this level, you must collect 1 cherry in 50 moves or fewer. When you complete the level, Sugar Crush is activated and will score you additional points.

Before the background was changed on the web version 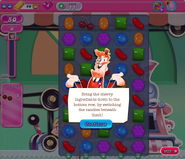 Tutorial (Before the background was changed)

Level icon
Add a photo to this gallery
Retrieved from "https://candycrush.fandom.com/wiki/Level_11?oldid=1569731"
Community content is available under CC-BY-SA unless otherwise noted.