With only 20 seconds to earn 533,480 points, which equate to earning about 26,680 points per second,[1] six colours making it hard to create the cascades required to spawn extra time candies and blockers reducing available board space, it is an extremely hard level to earn 3 stars. It is available to be voted as the hardest level in Reality to earn three stars. 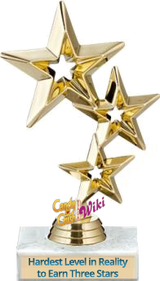 Level icon
Add a photo to this gallery
Retrieved from "https://candycrush.fandom.com/wiki/Level_1237?oldid=1157703"
Community content is available under CC-BY-SA unless otherwise noted.