Licorice Lair is the 260th episode in Candy Crush Saga and the fifth and final episode of World 52 (HTML5). This episode was released on 10 October 2018. The champion title for this episode is Candy Craver.

Tiffi dresses up for Halloween and goes trick or treating in a castle with Tommy. 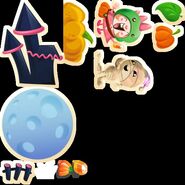