Licorice Lane is the 381st episode in Candy Crush Saga and the first episode of World 77 (HTML5). This episode was released on 23 October 2019. The champion title for this episode is Brilliant Bowler.

Tiffi and Mr. Yeti carve bowling balls from candies so they can play bowling. 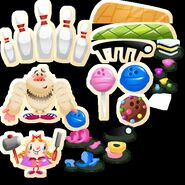