Liquorice Swirl (also known as Liquorice Wheels or Licorice Swirl) is a common blocker in Candy Crush Saga. It is the second type of blocker involving liquorice. The blocker looks like a swirl of black liquorice and a dot of cream in the middle, taking up an entire square. It first appears as the new element in the 4th episode, Chocolate Mountains, first appearing in level 36. It is uncommon in the 100s, but following the introduction of candy cannons in the 16th episode, Crunchy Castle in the 200s, it suddenly becomes much more abundant in the game due to the new element in that episode, the liquorice swirl candy cannon.

The liquorice swirl is an invasive blocker, meaning no candies can be in the same square as the blocker, much like frosting or chocolate. Like most blockers, it can be disposed of through breaking the candy next to it.

The liquorice swirl has several unique properties. It is one of the only blockers that can be clicked on and switched with candies. However, getting three liquorice swirl blockers in a row does not get rid of it though unlike candies, and cannot be combined with colour bomb.

Another strange, and quite possibly one the most annoying properties is that they are resistant to special candies and weakens their combinations, especially striped candies (like liquorice shells, liquorice curls and liquorice fences). If a striped candy hits a liquorice swirl, it will get rid of the blocker but won't get rid of any other candies beyond it. This can become a serious problem in later levels involving jelly and/or ingredients.

Many later levels use this blocker to increase difficulty due to their special candy resistance. Some examples of this are 210, 293, 333, 375 and 616.

If you make a move that removes at least one liquorice swirl immediately (which means, matching next to liquorice swirls), it's less likely to respawn in the following cascades. Otherwise, it may be raining into the board, greatly reducing effective moves.

Starting from level 1593, it is possible to have liquorice swirls inside locks. Unlike in Candy Crush Soda Saga and Candy Crush Jelly Saga, these swirls keep their resistance even if locked. 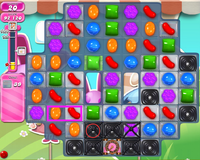 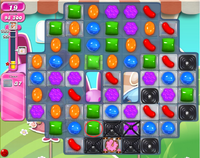 However, on web version, there is a glitch where locked swirls can be removed by an adjacent matching like common swirls. In this case, the lock will also disappear. This glitch does not occur on mobile.

In level 1778, it is possible to have liquorice swirls inside marmalade. Like locked liquorice swirls, they can also be removed completely if you match candies near them.

In levels with locked swirls or swirls in marmalade on the board at the start, the swirls will keep their resistance to special candies and can't be removed like they can in levels where they can be encased due to the magic mixer.