Lollipop Land is the 233rd episode in Candy Crush Saga and the third episode of World 47 (HTML5). This episode was released on 6 June 2018. The champion title for this episode is Candied Captain.

Tiffi and Neko are collecting lollipops from the trees to make a lollipop cone. 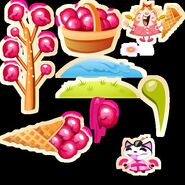