Lollipop Land is the 446th episode in Candy Crush Saga and the first episode of World 90 (HTML5). This episode was released on 18 March 2020. The champion title for this episode is Ready Ranger.

Tiffi and Bubblegum Troll explore the meadow for clues. 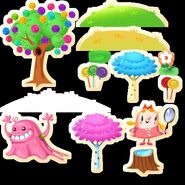