Lollipop Lane is the 285th episode in Candy Crush Saga and the fifth and final episode of World 57 (HTML5). This episode was released on 9 January 2019. The champion title for this episode is Candy Cutter.

Tiffi uses scissors to chop down the giant lollipops that are in Sue's way. 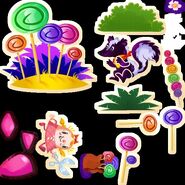