Lovely Lake is the 483rd episode in Candy Crush Saga and the third episode of World 97 (HTML5). This episode was released on 10 June 2020. The champion title for this episode is Sugary Swimmer.

Tiffi and Jean-Luc take a swan boat across the lake. 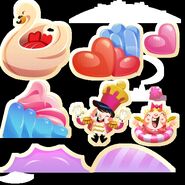 (After rainbows appear)
Add a photo to this gallery

Retrieved from "https://candycrush.fandom.com/wiki/Lovely_Lake?oldid=1711140"
Community content is available under CC-BY-SA unless otherwise noted.