Lucky Candy is a special candy in Candy Crush Saga that appears in candy order levels and mixed levels that require candy orders. Starting in the 17th episode, Chocolate Barn, a lucky candy can come out of a mystery candy and starting from the 29th episode, Soda Swamp (after redesigning), onward it can be on the board under liquorice locks at the start of a level. They can't be formed with any candy combination, much like other booster-based special candies.

Lucky candies look like circles with a large tick (check mark) on the centre. To activate a lucky candy, one must switch it like a regular candy to form a match-three or higher. This will destroy the other candies, and the lucky candy will turn into a candy type that the player needs to fulfil an order, whether it is a regular candy, a special candy, or even a blocker. Generally, people want lucky candies to become special candies that are difficult to create (i.e. wrapped candies or colour bombs), but this is all due to probability.

During Sugar Crush, any unused lucky candy will be turned into a random special candy, and go off later.

Note that, lucky candies cannot produce the following items even if they are required:

A purple lucky candy
Add a photo to this gallery 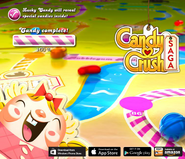 What the lucky candy does.
Add a photo to this gallery

Lucky Candy Cannon (old)
Add a photo to this gallery