Lucky Lawn is the 300th episode in Candy Crush Saga and the fifth and final episode of World 60 (HTML5). This episode was released on 27 February 2019. The champion title for this episode is Shamrock Sidekick.

Tiffi and Boomer gather lots of honey from the pot of gold at the end of the rainbow. 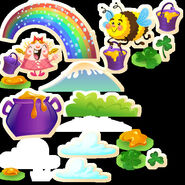