Lunar Landing is the 195th episode in Candy Crush Saga and the fifth and final episode of World 39 (HTML5). This episode was released on 8 November 2017 on Windows 10 App only and 15 November 2017 officially. The champion title for this episode is Glowing Guide. 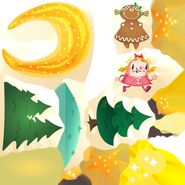