Luscious Landing is the 234th episode of Candy Crush Saga and the third episode of World 47 (HTML5).

It's Allen's birthday and he has crashed onto a giant cake. Tiffi decides to put a candle on top of the spaceship and Allen's head. 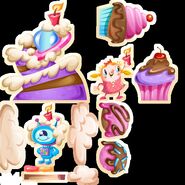 Retrieved from "https://candycrush.fandom.com/wiki/Luscious_Landing?oldid=1248932"
Community content is available under CC-BY-SA unless otherwise noted.