Magic Dash is a former event that was a combination of two previously existing events, Treasure Ahead and Cake Climb. Players could win prizes by completing levels without losing lives. If the player met the level failure message, the counter for the number of levels completed went back to 0. Exiting the level before making the first move, however, did not make the counter go back to 0.

Players can get a chance to test Mort's magical helmets by passing levels without losing a life.

Though they have different names and prizes, their mechanics are similar. Click here for more details. One notorious instance is Booster Bot.

Attempt to fail a level while wearing first helmet

Attempt to fail a level while wearing second helmet 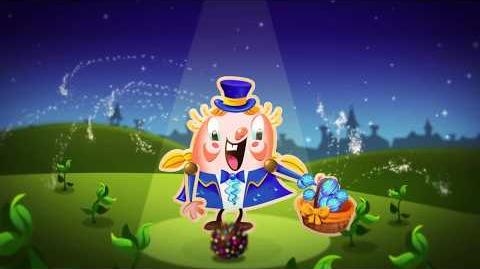 Candy Crush Saga - Tiffi's Challenges
Add a photo to this gallery
Retrieved from "https://candycrush.fandom.com/wiki/Magic_Dash?oldid=1568627"
Community content is available under CC-BY-SA unless otherwise noted.