Marble Meadow is the 326th episode in Candy Crush Saga and the first episode of World 66 (HTML5). This episode was released on 29 May 2019. The champion title for this episode is Splendid Sculptor.

Tiffi and Cherry Baroness decorate the antique statues with caramel and sweeties. 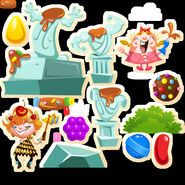