Marshmallow Mansion is the 421st episode in Candy Crush Saga and the first episode of World 85 (HTML5). This episode was released on 22 January 2020. The champion title for this episode is Fluffy Fixer.

This episode started a trend where every episode from here on has a story that is an exact replica, now exactly in sequence. This trend continues up until at least Episode 488 (with one exception) for a total of 68 episodes.

Tiffi and Pete fix up the mansion. 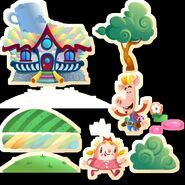