Marshmallow Mire is the 238th episode in Candy Crush Saga and the third episode of World 48 (HTML5). This episode was released on 27 June 2018. The champion title for this episode is Marshland Master.

Tiffi uses marshmallows as platforms to cross the swamp and reach Bobby. 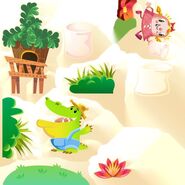