Mary is a minor character in Candy Crush Saga. She is a tooth fairy and encountered in the 24th episode, Pearly White Plains. Before introducing level 336, her teeth have been hit by a dangerous colour bomb that has made them begin to yellow and decay. Tiffi promises the return of white, shiny teeth. After completing level 350, her teeth become sparkly white and she thanks Tiffi.

In the 137th episode, Cavity Cave, a big blob of jelly suddenly falls down on her. Tiffi uses her toothbrush to sculpt a jelly dress out of it.

In the 152nd episode, Smiley Seas, she is checking up on teeth all over the Candy Kingdom, but some of them are messy. Tiffi dives into the adventure and helps scrub those mess up with her.

In the 180th episode, Cocoa Cove, she and Tiffi are standing on a treasure island at the chocolate sea.

Oh no! My beautiful teeth are ruined!

Do not worry Mrs. Tooth Fairy! I am sure we can fix this somehow!

It is all the fault of the candy!

It is not the fault of the candy! It is all about brushing your teeth! 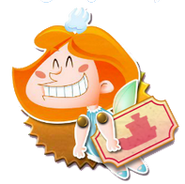