Not to be confused with Marzipan Mine.

Marzipan Maze is the 223rd episode in Candy Crush Saga and the third episode of World 45 (HTML5). This episode was released on 18 April 2018. The champion title for this episode is Glorious Guide.

Allen's spaceship has crashed once again, this time on a hill in the middle of a maze. Tiffi uses a walkie-talkie to guide Allen through the maze and get to his spaceship. 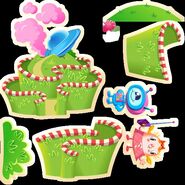