Meringue Moor is the 34th episode in Candy Crush Saga and the fourth episode of World 7 (HTML5). This episode was released on 9 October 2013. This episode contains the milestone level 500. The champion title for this episode is Papa Grande.

Before episode:
Mr. Pear wants to be a candy because he is feeling left out. There is a chocolate-filled pink bucket below him.
After episode:
Tiffi cuts the rope holding the pear and dips the pear in the chocolate bucket. When the pear comes out, he has turned to a candy.

Meringue Moor is a somewhat easy episode, with a mean of 3.2. It contains two hard levels: 488 and 494. Overall, this episode is harder than the previous episode, Waffle Workshop.

This episode contains the milestone episode finale, level 500, which was previously an infamous extremely hard ingredients level until it was nerfed.

Let me take care of it! 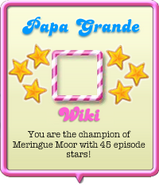 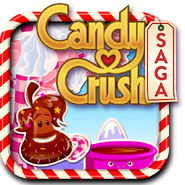