Meringue Moor is the 383rd episode in Candy Crush Saga and the third episode of World 77 (HTML5). This episode was released on 24 October 2019. The champion title for this episode is Delicious Dipper.

This is one of the episodes which are exact replicas of earlier episodes in both background and name. Internally, this episode should be named as Candy Cane Canopy. 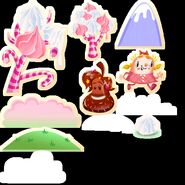