Merry Market is the 277th episode in Candy Crush Saga and the second episode of World 56 (HTML5). This episode was released on 12 December 2018. The champion title for this episode is Stellar Seller.

Tiffi and Jean-Luc go Christmas shopping in the market, which is snowy and decorated with stars. 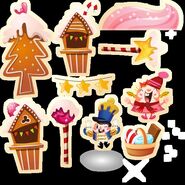