Milly is a minor character in Candy Crush Saga. She is Tiffi's twin sister even though she is a mermaid. She is encountered in the 22nd episode, Savory Shores. Before introducing level 306, Tiffi refers to her as "underwater twin" when she arrives, and it is revealed that she has lost her seahorses. After completing level 320, Tiffi plays a kazoo that attracts the seahorses. Milly is ecstatic at their return and thanks Tiffi.

In the 118th episode, Blueberry Brush, she and Tiffi are in a camping, and she has candy sausages to roast on the fire.

In the 142nd episode, Treacle Retreat, while she is sunbathing, she got a seaweed stuck in her hair. Tiffi combs and fixes Milly's hair, creating a fabulous hairdo instead of removing the seaweed.

In the 22nd Dreamworld episode, Coral Corral, Tiffi and Milly are riding with a seahorse together.

Treacle Retreat
Add a photo to this gallery

Coral Corral (animation)
Add a photo to this gallery 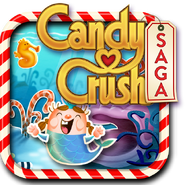 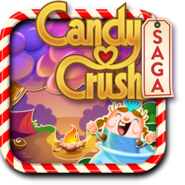 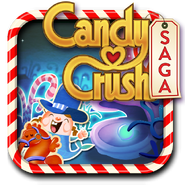 Milly on the box of real life jelly fish 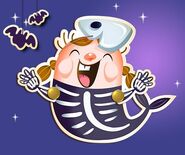 Milly in Halloween costume
Add a photo to this gallery
Retrieved from "https://candycrush.fandom.com/wiki/Milly?oldid=1443533"
Community content is available under CC-BY-SA unless otherwise noted.