Minty Marina is the 270th episode in Candy Crush Saga and the fifth and final episode of World 54 (HTML5). This episode was released on 14 November 2018. The champion title for this episode is Floaty Fixer.

Tiffi fixes Olivia's yellow rubber float so that she can safely swim in the marina. 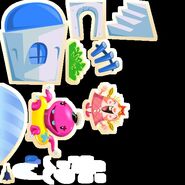